Categories: Bianca B, Fiction
Author: Shilpi Somaya Gowda
Publisher: William Morrow
From the international bestselling author of Secret Daughter and The Golden Son comes a poignant, unforgettable novel about a family's growing apart and coming back together in the wake of tragedy. The Olander family embodies the modern American Dream in a globalized world. Jaya, the cultured daughter of an Indian diplomat and Keith, an ambitious banker from middle-class Philadelphia, meet in a London pub in 1988 and make a life together in suburban California. Their…

Special thanks to TLC Book Tours & William Morrow for providing our copy of The Shape of Family by Shilpi Somaya Gowda in exchange for an honest & fair review.

The Shape of Family by Shilpi Somaya Gowda

The Olanders are a close-knit American family. In 1988, Jaya and Keith met in London, and eventually settled in California. Their kids – teenage Katrina and eight-year-old Prem – are the joy of the home. However, when sudden tragedy strikes, each member grapples with their own demons and what it means to be a family.

Despite the strong foundation of family the Olanders have cultivated, nothing prepares them for the shock that rocks each of them. Instead of banding together in difficult times, each person seeks refuge in their own way. Father, Keith, throws himself into work – finding the routine and normalcy comforting. Mother, Jaya falls into a deep depression. Katrina, has laser-focus on succeeding in high school, knowing it’s her escape route. Prem, wants to bring everyone back the the close-knit family they once were, but realized their lives have changed forever.

The Shape of Family shows how grief consumes us in different ways. Each family member blames themselves for what happened. But, never sharing those feelings with one another means the guilt eats away at each of them.

Karina in particular, finds herself struggling to find a sense of normalcy. Turning to self-injury provides some relief, but won’t turn back time. So, when in college she meets a man who makes her feel valued and calls on knowledge of plants (she’s worked in the Botany Lab), she falls head over heels quickly. But, things aren’t always what they appear and soon Katrina heads down a dark path.

I am really into this book! The Shape of Family by Shilpi Somaya Gowda challenges us to face our fears as we process grief with the Olanders. In particular, Gowda’s portrayal of the mindset of a young woman turning to self-injury resonated. It isn’t about wanting to die, it is about releasing the pain within, and punishing oneself for our imperfections. The Shape of Family isn’t a happy tale, but it does provide a bird’s-eye view of what it means to be family and how we must find our way in live.

More Info About The Shape of Family by Shilpi Somaya Gowda

Purchase Links for The Shape of Family by Shilpi Somaya Gowda 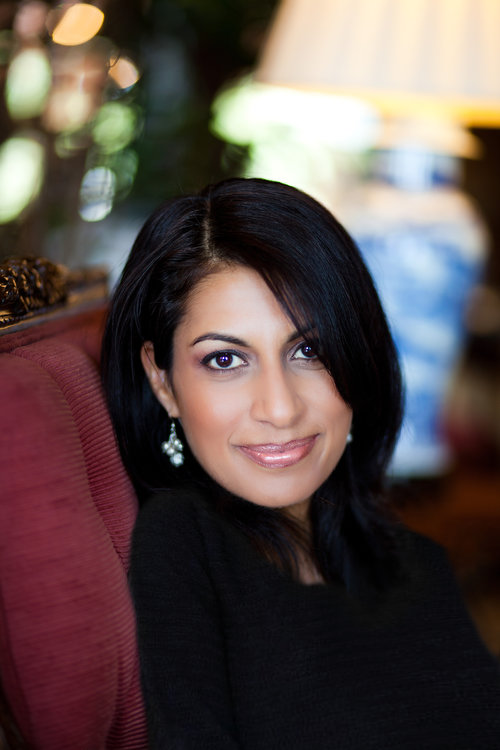 Shilpi Somaya Gowda was born and raised in Toronto, Canada. In college, she spent a summer as a volunteer in an Indian orphanage, which seeded the idea for her first novel, Secret Daughter, published in 2010. It was a New York Times and #1 international bestseller, and was translated into over 30 languages. Secret Daughter was an IndieNext Great Read, a Target Book Club Pick, a ChaptersIndigo Heather’s Pick, and an Amnesty International Book Club Pick. It was a finalist for the South African Boeke Literary Prize and the IMPAC Dublin Literary Award.

Her second novel, The Golden Son, was published in 2015-16 around the world, was a #1 international bestseller, a Target Book Club Pick, a Costco Buyer’s Pick, and was awarded the French literary prize, Prix des Lyceens Folio. Her first two novels have sold over two million copies worldwide, and her third novel, The Shape of Family, was published in October 2019 in Canada, where it became an instant bestseller. It will be released in the USA on March 17, 2020.

Shilpi holds an MBA from Stanford University, and a Bachelor’s Degree in Economics from the University of North Carolina at Chapel Hill, where she was a Morehead-Cain scholar. She has served on the Advisory Board of the Children’s Defense Fund, and is a Patron of Childhaven International, the organization for which she volunteered in India. She lives in California with her husband and children.